These are the people who are present at the larp, and who you will be playing as characters. They are not all of the inhabitants of High Verley, which is a bit too big to fully represent in a larp of this size – they're a representative sample, chosen to give a good coverage of the social issues etc of the time. You can click through to read their full character briefing, but be aware that some have warnings for potentially-disturbing content.

D'Clemont
Sir John d'Clemont – the squire of High Verley, the most important and powerful person in the village. Sir John is trying to keep the village successful and prosperous, while entering into a new marriage and ensuring the success of his daughter's marriage. (Content warning: coercive sex.)
Lady Katherine d'Clemont – Sir John's second wife, the new lady of the manor. Lady Katherine is desperately trying to make a success of her new marriage, and produce an heir, while hiding her own secrets from her husband and the village. (Content warning: miscarriage.)
Mistress Anne d'Clemont – Sir John's daughter, of a marriageable age. She is torn between being a dutiful daughter and finding her own path.
​
Brentwood
Reverend Andrew Brentwood – High Verley's longstanding rector. A reasoned intellectual, responsible for the village's spiritual welfare.
Curate Luke Cavering – Reverend Brentwood's ward and assistant. Ambitious and devout, a former soldier injured fighting against the King.

Rochford
Mayor Nathaniell Rochford – the civil administrator of High Verley, a distant relative of Sir John's. Mayor Nathaniell is conscious of his own position in the village, and the lengths that he needs to go to to protect it. (Content warning: internalized homophobia.)

Thaxted
Doctor Isaac Thaxted – the village's medical practitioner. A man of science, and hiding his own secrets, he feels powerless to comfort his wife in the face of his child's illness. (Content warning: severe illness of a child.)
Mistress Meriall Thaxted – married to the doctor, and the community's midwife. Mistress Meriall wants to root out the black magic responsible for the sickness of her child, and so save his life. (Content warning: severe illness of a child.)

Maldon
Mistress Isabell Maldon – widow of a wealthy silk merchant, who now administers that business herself and is determined to hold onto it and ensure it's future. (Content warning: previous abusive marriage.)
Mistress Thomasin Maldon – Isabell's daughter, who helps her with the business, and who has been recruited to assist the witchfinders. Mistress Thomasin feels that she is blessed to have been chosen in this task. (Content warning: complicity in witch finding.)

Taylor
Peter Taylor – a farm labourer, working in the fields of the manor.  Peter is desperately trying to protect his family from witchcraft investigations, his son from his wife and his wife from herself.
Charity Taylor – Peter's wife, formerly a maidservant at the Manor. Charity was raised to believe that she was evil, and is convinced that the witchfinders will discover it. (Content warning: coercive sex, physical abuse of a child, physical abuse as a child.)
Magdalen Taylor – officially the daughter of Peter and Charity, but widely known to be Sir John's bastard. Magdalen is working at the manor and trying to find her place in the world.
John Taylor – the younger child, troubled and convinced by Charity that the same evil that is within her is also within him. (Content warning: physical abuse as a child, internalized homophobia.)

Smith
Daniel Smith – the village blacksmith, whose wife Ellen died some years ago. Daniel understands the need for sacrifice, perhaps even of some members of his family to save others. (Content warning: grief.)
Jennet Long – Ellen's mother, who helps to keep house for Daniel. Reliant on charity and having missed church too many times Jennet is vulnerable to the accusations of witchcraft. (Content warning: depression, grief.)
Cicely Smith – the oldest child, who sometimes helps Mistress Thaxted with midwife work. Cicely wonders if it's possible to find her own path in life, but the witchfinders are coming and that sort of thinking is dangerous.
Rose Smith – maidservant to the Maldons, who has been recruited to assist the witchfinders. Rose is a social climber, but may be putting herself at risk with her attempts to better her station in life. (Content warning: complicity in witch finding)
Byran Smith – apprentice to his father, hot-tempered and reckless,  dreams of glory. 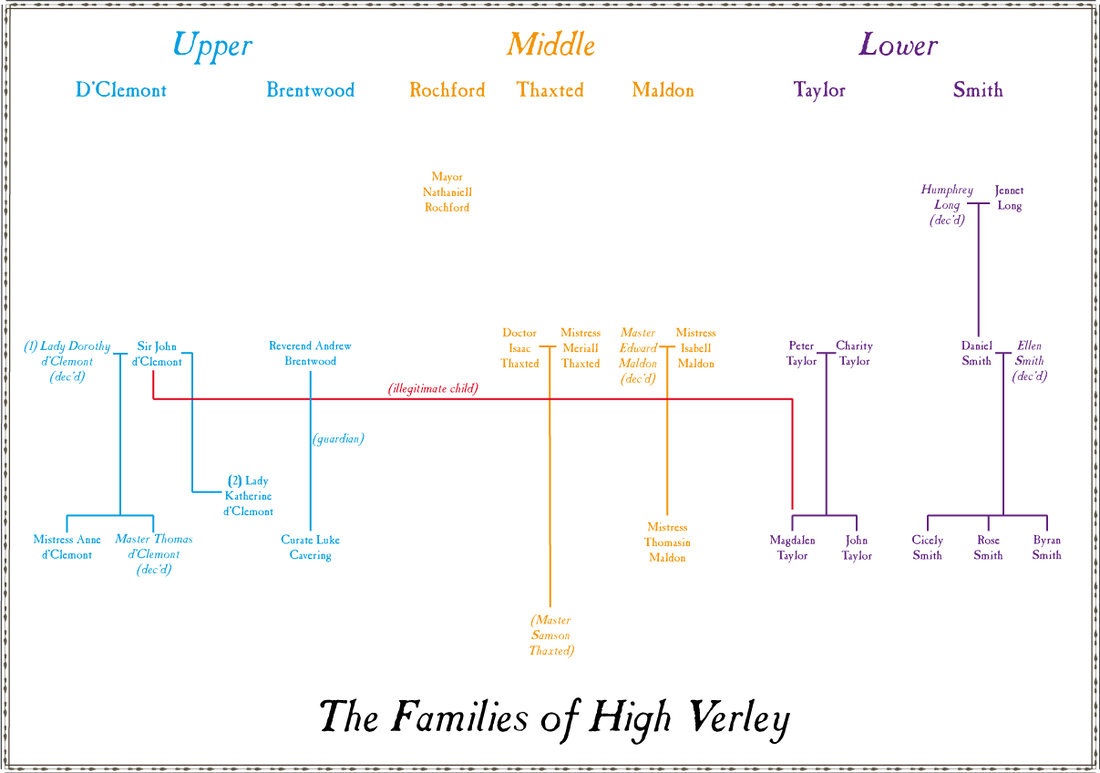